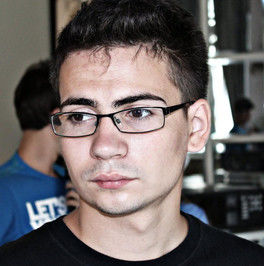 Research Scientist
I am currently an AI Research Scientist. Previously, I did my PhD studies at the University of Nottingham part of the Computer Vision Laboratory under the supervision of Dr. Georgios Tzimiropoulos. My current interests are in deep learning and key points localisation. Prior to this, I graduated from Technical Univeristy of Iasi with a BEng. in Computers and Information Technology and a major in Computers Engineering.
Contact email: adrian [at] adrianbulat.com [GPG]
Github
Linkedin
Twitter
Google scholar

Yes, but is there a story?

Of course there is one, even when there appears to be none.

The story began 20 years ago, with a little guy who decided to see the daylight during the night. Not one of my brightest ideas, but hey, it was my first time being alive. A few years later, while I was watching the sky, I started dreaming about counting uncountable infinities and travelling through space and time. Nothing simpler than that. Soon after, a computer started enlitening my table during the night accompanied by the keyboard sound. I still remember Windows 95 crashing while I was trying to save a game, worst feeling ever as a kid. Leaving this behind, I enjoyed playing classicals as Bomberman, Mario or Tarzan. What a time to be young! Years had passed and the little kid has started to grow. Suddenly, I was in high school. During the next few years, I fell in love twice, wrote my first program (oh, Mighty Pascal!), and drank my first beer (beah!). Without even noticing, it was the time to be the man the kid dreamed about and to stay the kid the man may dream at. And so, my first year as an undergrad student began. I still remember the math professor reminding us that the paper doesn't have the property to autocomplete itself, therefore we must solve the equations by ourselves, even if they look so scary. I could probably write countless pages about this, but the short idea is that in 4 years' time I completed my studies and I officially became a computer engineer.

Inspired by the dreams of a little kid, by the desires and passions of an older me, I decided to follow my dreams, trying to push the science boundaries, trying to make the impossible possible. Because, in the end, there is always a set of axes where everything is simple, you just have to find them.